I’m thankful for sports, the greatest thing ever invented. The one man out of any sport that I’m thankful to have was James Naismith, the man who created the best sport ever, basketball. I’m thankful that I can watch sports all the time and play them. I love all of the gut turning events that you can’t stop watching for a second. Like the best game, the best word in sports, game 7. In all sports with a best of whatever series the major championship, is played in a best of 7 series. Baseball, basketball, and hockey are the sports with the best game, game 7. In all three of these sports I’ve see crazy game sevens. I love Chicago sports, I will never forget the 2014 Stanley Cup, when the Blackhawks won their third Stanley Cup of the decade, I was at home and I couldn’t even sit down even though they blew out the Lightning I’m always tense.

When the Cubs won the World Series, I was super tense even though they were up 5-1. I was always tense. I felt something was coming, when Rajai Davis hit that two-run home run I was dead. Momentum with the Indians I knew the Cubs would lose. Until the rain delay that gave time for the Cubs to regroup. Then Ben Zobrist hit the RBI that put the Cubs in the lead. Then with two outs and one man on second, Jose Ramirez hit the ball and Kris Bryant picked up and made a marvelous throw to Anthony Rizzo for the final out and the Cubs were World Series champions! The game lasted around four hours and 30 minutes and the game ended at around 11:50 PM. I had to watch the celebration and needed to see Ben Zobrist hold his second World Series MVP. I didn’t go to sleep until around 2:30 AM — it was the greatest moments in sports history– and the longest drought ended. I’m thankful for these moments, I’m thankful I got to witness them. 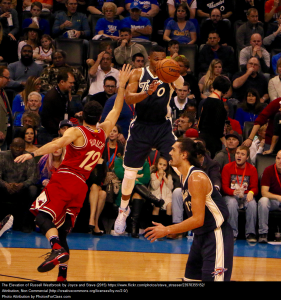 This is a picture of Russell Westbrook.

How the Cubs won the 2016 World Series